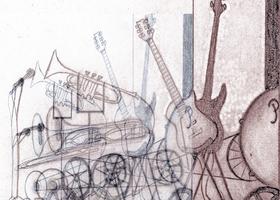 Music Box is an absurd mechanical contraption that creates frenetic musical noise in celebration of, and response to, the surreal carnival-like atmosphere of the event. This work was initially inspired by the cacophony made by numerous marching bands, as they gathered for Toronto's Santa Claus Parade. Other influences include the whimsical machines of Dr. Seuss and one-man bands, in which the inventive, utilitarian mechanics are transparent to the audience and viewer.

Sounds are produced by an array of real instruments, acted upon by simple mechanical interventions and powered from a central motor.  Each instrument has its own cycle, which interacts with the others, creating an infinite number of variations, which nevertheless, sound very much the same.

As part of the larger curatorial exhibition PARADE, the music machine moves back and forth on a stationary flatbed trailer; a float within a float. The machine periodically disappears inside a large box positioned at one end of the trailer, the door slamming shut behind. Reminiscent of a cuckoo clock, Music Box creates child-like anticipation as one awaits its reappearance.

John Dickson is a Toronto-based artist whose mixed-media sculptures and installations explore humanity's tenuous relationship with the natural world.  Underlying themes address our need for stability and order in a constantly shifting universe. Recent exhibitions include installations at the AGO’s Young Gallery and the Perimeter Institute in Waterloo. He has shown internationally in the USA, France, the Czech Republic and Denmark, and is represented by Katharine Mulherin Contemporary Art Projects.