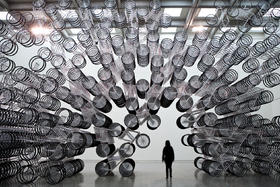 Yong Jiu, literally translated as "forever", is the foremost bicycle brand in China; Ai re-interprets such everyday found objects in an abstract and symbolic way.

The sheer quantity of bikes and the diverse perceptions of viewing points create a colossal labyrinth-like, visually moving space, which represents the changing social environment in China and around the globe.

Film Screening: Ai Weiwei: Never Sorry
Toronto City Hall Council Chambers:
7 pm /9 pm /11 pm /1 am /3 am /5 am
The inside story of a dissident for the digital age who inspires global audiences and blurs the boundaries of art and politics.

Widely considered to be one of the most significant cultural figures of his generation, Ai Weiwei successfully assumes multiple roles, including conceptual artist, architect, curator, designer, film-maker, musician and activist. Using traditional and innovative methods of production, he links the past with the present while exploring the geopolitical, economic and cultural realities affecting the world with humor and compassion. His most recent work appeared in the German pavilion at the Venice Biennale 2013.