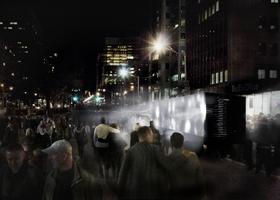 In a stationary parade, people flow around the floats, engaging them as they pass by, but in this case the movement of the crowd replaces the usual movement of the floats.  In and of itself, PARALLAX has no motion and is a stationary light fixture, but it becomes a shifting object when the observer travels down its length. The visual experience changes as a person walks down the length of the float and the light apertures morph in size, creating the illusion of a glittering wall of light.

Composed of horizontally stacked tubes of different sizes, PARALLAX uses light to articulate movement. The tubes are tightly packed apertures, a dot screen controlling the amount of light the viewer can see based on their location. This perceptual parallax effect is dependent on the movement of the observer. As the viewer walks down the length of the float, the diameter of the tubes shifts, creating two different pixelated patterns inspired by natural shapes. These patterns are only notional when the observer is close to the float, but resolve into a cohesive image when viewed from a distance. In this way, PARALLAX is activated by user interaction.

Idea Tank Design Collective is a group of five designers: Andrew Choptiany, Mark Erickson, Matthew Kennedy, Clayton Blackman and Sam Lock who met at Dalhousie University and continue their practice while spread across Canada. Idea Tank has a special interest in detailed craft and how built environments affect the people who experience them. The team members have a passion for construction and involve themselves in the building phase of every project.