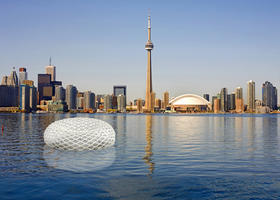 Thank you to Harbourfront Centre

Toroidal topologies are found in tornados, whirlpools, vortexes and magnets. They have come to symbolize the movement of the earth around a solar system. Floating this architectural vessel on the water directs our movement around a continuum, echoing the watery pathways it rests upon.

Torus acts as a peculiar meeting space with a watery center. The architecture demands particular arrangements, lending itself to multiple small gatherings and large groups who embrace the space’s tunnel effect. These events revolve around ongoing explorations of ritual, homage, and empathy through embracing loss in the Anthropocene Era.

Just prior to sunset, the Torus is tugged to shore and tied to a pier where it will be docked for the night. As the boats depart a circular ceremony begins. People are invited to walk in and around the floating Torus and enjoy a serene space as the sun sets. Similar to the worldwide celebration of Yemenja, people are invited to celebrate the water.