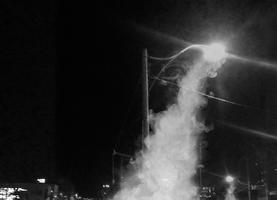 With assistance from Artscape Gibraltar Point

This work cuts through the exhibition and activates the entire length of Queens Quay East.

The normally busy street is closed to traffic and many of the street lamps are turned off. The road becomes a gloomy, ghostly scene punctuated by a series of modified street lamps from which smoke falls in a glowing deluge to the ground. Given the Waterfront’s capricious weather conditions, the experience of Dispersal Zone changes dramatically hour by hour. If the wind is strong, the smoke is briefly captured by the light before rapidly dissipating in delicate, wispy veils. In calmer winds, the smoke billows and cascades in an illuminated broadening column and then pools at the foot of the lamppost. If the night air is humid, the smoke is caught in a dense fog and hangs floodlit in trees, alcoves, and doorways.

The perceptual effects of the smoke — including the ways in which it continuously reveals and conceals parts of the urban environment or makes invisible things, like the wind, visible — are reproduced here as a kind of performance. Dispersal Zone blends a spectral theatricality with visions of civil unrest or military action that regularly alter the atmosphere: tear gas, tyres burning in the streets, smoke grenades, or more sinister gas attacks and chemical warfare.

Artist Tim Knowles lives and works in London. His work incorporates specially constructed mechanisms, apparatuses or processes which utilize external forces (natural or man-made systems) to direct the work. Akin to scientific experimentation, a situation is engineered in which the outcome is unpredictable and beyond the artist’s control. Knowles has exhibited widely, including at MassART, USA; Art Stations, Poland; Generali Foudnation, Austria; Plymouth Arts Centre, UK; Hayward Gallery, UK and Gallery Skuc, Slovenia.