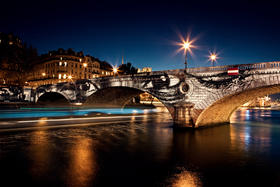 Portrait of a Generation, 2004

JR spent time in countries affected by divisions, atrocities and deep struggles; meeting anonymous people with whom there is hardly a spotlight; except when a village is on fire or fighting a war. He explored the depths of favelas and the heart of the slums to seek out these narratives.

Working with them he found a resistance, a truth telling and a complexity and he often uses his work as a platform for these insights.

As a result, JR began practicing "pervasive art" where he created works like pasting large-scale eyes of individuals he met, to shed light on a person and a story too often ignored.

JR often asks people to make faces for the camera, but some prefer to pose silently, allowing us to read in their eyes everything they have been through.

This project features the eyes of individuals who dream to be in Toronto.

JR wants the viewer to see themselves not as spectators or critics, but rather as inside the images, involved in them and concerned by them.

"By nature my work is about response, but I choose not to consider myself a political artist, I'm just simply putting my finger on an issue. My only wish is that you pay attention." – JR