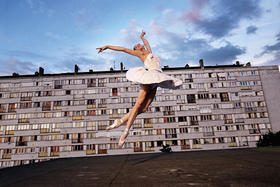 The film Les Bosquets brings the audience to a place where art and the power of image interweave. Based on the story of Ladj Ly, the performance of the ballet Les Bosquets for the New York City Ballet (2014) and inspired by the riots in the French suburbs in 2005.

JR reveals his experience in the ghetto of Montfermeil where he created his first project, Portrait of a Generation.

This short film will be presented exclusively in galleries and museum shows.