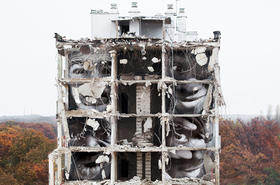 Photography is just a medium for JR, it is where and how he places the work that matters.

Les Bosquets, reveals portraits of young people from the housing projects around Paris.

"The destruction of a re-construction." - JR

Art and social uproar interweave in an image designed to challenge the widely accepted "cliché of the ghetto."