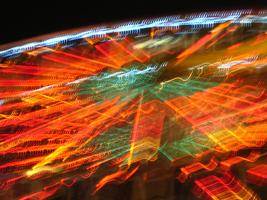 “Ferris Wheel” returns to the simplest roots of the spectacle to explore how a homespun midway attraction can convey a sense of magic and celebration. The artist conceived the biggest welded steel formation she could physically manage herself in the backyard. Decorated with LED lights and multi-coloured wire, two 15-foot tall spinning rings turn freely in the wind. The large circles, which move in opposite directions, create dynamic lighting effects in endless variation. The whirligig does not accommodate passengers but is instead an exploration of colour in motion. Easily dismantled and moved in a 12-foot cube van, the nomadic sculpture echoes the travelling sideshow.

The earliest designs used for amusement parks may have been based on large wheels used to lift water for irrigation. Adventurous children might have entertained themselves by riding on these water circles when they were first developed 2200 years ago.

“Pleasure Wheels” were widely documented in the 17th century in such diverse parts of the world as India, Persia, Constantinople, Bulgaria, and England. Fairgrounds continue to capture the imagination of many different cultural communities as they gather to celebrate with displays of fantastical decor.