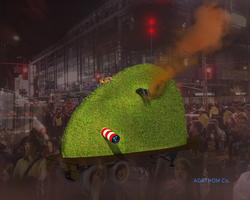 In association with David Johanns.

With assistance from Jerome Keays from Design Turf.

Thank you to Serafima Korovina.

Thank you to Stanley Sun.

Thank you to Linton Green from Metal Forged.

For AGATHOM Co., the site is always the starting point, a space where structures fit and sit in existing physical and/or natural environments. Rumbling Drumlins explores the ersatz qualities of a traditional parade float as a way to highlight the haphazard nature of our built environment. The float poses some fundamental questions about the city and its environs: questions addressing not only the physical presences that surround us but also more sensory and ambient occurrences.

On a daily basis residents and visitors alike find themselves asking questions about a city “What’s that smell?” “What is that noise?” “Where is it coming from?” Other more substantive questions about built environments may only come to the fore when art and design triggers them. “Who built that?” “Why?” “Is it supposed to mean something?” This parade float attempts to distil the concerns of a city into floating responses for the inhabitants. Rumbling Drumlins acts in the same spirit of welcoming questions and making connections between what surrounds us and its significance.

Principals Katja Aga Sachse Thom & Adam Thom both graduated from SCI-Arc with a MA in Architecture. They both hold BFA degrees in Sculpture: Katja from University of New Mexico 1995 & Adam from Nova Scotia College of Art & Design in 1992. Katja teaches at Ryerson University. Adam is on the executive board of the TSA & the JVS.