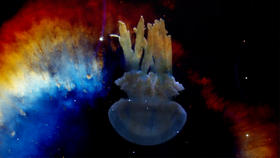 Derived from the title of a Jacques Cousteau film documenting undersea life as explored from a bubble to house humans, World Without Sun paints a landscape of the romantic sublime through the prism of an era, hell bent on destruction. From the depths of the ocean to vast nebula and intimate brain cells, the work explores the concept that the universe is made up of multiple subjective environments of which the human is but one. The Square becomes a space of intricately connected life forms seemingly teetering on the brink of both oblivion and renewal. World Without Sun is a visceral experience of sound and light that urges us to consider the radical interdependencies of life on this planet. Exploring the depths of the ocean through luminous jellyfish to the outer reaches of the universe, the artist suggests our being in the world is finite.

Christine Davis was born in Vancouver and attended York University in Toronto. She has lived in Vancouver, Ann Arbor, Lusaka, Paris and Toronto, where she currently resides. At its core her work, through a cosmological impulse and experimental process, weaves a relation between sentience and language to create installations of an unusual beauty and rigour. She has been working with slide dissolve projections and the materiality of the screen for over 10 years. She is a founding editor of the interdisciplinary journal PUBLIC.