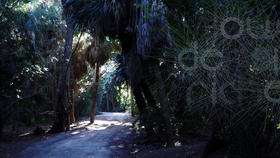 Supported by The Rauschenberg Foundation

Filmed on the Florida island of Captiva, where artist Robert Rauschenberg lived from the sixties, George Bolster’s film shows the landscape that he bought and saved from developers, and his conservation efforts following a devastating hurricane: replanting jungle and reclaiming beaches.

Serving as a microcosm/site/set the landscape represents two different time periods: Rauschenberg’s efforts symbolize the world changing optimism of the sixties and an attempt to establish rationalized moderation today in the face of the human race’s destructive evolution.

Drawing on Darwinism and the idea that living through ritual, religion, and tradition; the human race is ceasing to adapt to the crises it faces. It proposes the hope for an escape from a poisoned planet through the embracing of theoretical physicist Stephen Hawking’s idea of two earthlike planets, which we have yet to evolve the advanced technology to reach.

Addressing the affect of established cultural/belief systems and questioning received ideas of the afterlife that encourage a focus on the next world undermining any impetus to change behavior or adapt. The film functions as a call to all members of society to become active in issues around landscape and preservation.

George Bolster was born in Ireland and lives in New York. He has exhibited in museums and galleries in Europe and the USA. Solo: High on Christ, Chung King Projects, Los Angeles; idealisms fail because humans have to live them, Monster Truck, Dublin; Sociodesic: a.s.f.t.t.g.l., G.A.C. and Eye of the Needle, Dublin. Group: These Days: Elegies for Modern Times at Mass MoCA and Irish Art does not Exist, Station Independent, New York; Flip, Los Angeles; EVA International, Limerick and Passing Through at Lewis Glucksman Gallery, Cork.