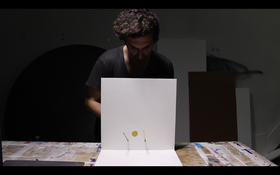 The sun will always rise and fall from east to west, 2014
Photo: Jamie McMillan

The sun will always rise and fall from east to west, 2014

This tale begins with an argument between two pairs of lovers. The eastward couple demands the sun to continuously rise, the westward insists on its perpetual decent. The ensuing conflict has the sun pushed and pulled in an infinite pattern of rising and setting from east to west. The sun, trapped, succumbs to the perpetual movement through day and night, for all eternity.

The conflict between these two couples and the sun starts out simple enough.

We have all looked up to the sun for answers in love. We have all wanted to relive that moment in which the sun touches the face of the one we love.

The pattern, although repeating, is no less beautiful.

The sun penetrates the horizon. Its light gently exposing glances which were previously shrouded in darkness. The diminishing light of dusk flickers in their eyes.

A third party in their feverish love, the sun penetrates the surface of their skin. They sit still awaiting the time to pass. A moment of contemplation as they stare at one another.

This myth of the sun is reenacted through a geometric arrangement of dance, puppetry and storytelling throughout Toronto. Through performances, both intimate and public, the story describes the rise and fall of the enduring romantic sun.

Derek Liddington’s work has been exhibited in numerous public settings, including the Art Gallery of Ontario (2014), Cambridge Galleries (2013) and the Art Gallery of Mississauga (2011). Liddington has participated in numerous residencies, including Onagawa AIR, Japan (2013). Most recently Liddington’s work was exhibited at Art Berlin Contemporary (2013) and NADA New York (2014). Liddington has been the recipient of numerous grants, including the Toronto Arts Council, Ontario Arts Council and Canada Council for the Arts.

Performances every half hour