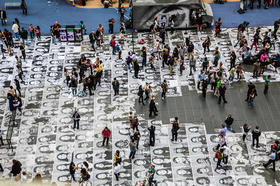 JR is interested in participatory art where there is no stage separating the actors from the spectators, where people don't just see art; by contributing their stories and portraits, they make it.

In 2011, after receiving his TED Prize, JR called for the creation of a global art movement. His Inside Out art project allows participants to be photographed and have their portrait pasted in support of a shared idea, project or action.

A socially engaged practice based in relational aesthetics, the act of participation gives meaning to the ephemeral work. As the project is completed and infused with energy, emotion and intellect, it evolves into a larger work, resulting in a collective memory.

Starting September 28, add your face to the installation at an Inside Out photo booth truck at Nathan Phillips Square. Here you are invited to claim space as yours in the public and political epicentre of Toronto.

"I wish for you to stand up for what you care about by participating in a global art project, and together we'll turn the world...INSIDE OUT." – JR

Breaking down generational, socioeconomic and racial barriers, Inside Out has become a social phenomenon that over 250,000 people from more than 120 countries have participated in worldwide.