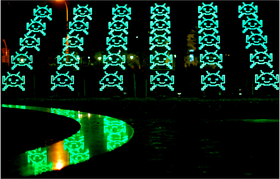 They’re green, they’re angry, they’re happy, they’re from the 80s and the whole city is their playground. They are the Green Invaders. Inspired by the iconic Tomohiro Nishikado video game, Green Invaders immerses viewers in a light experience where low technology and high technology get mixed together, for an emotional and entertaining reconnection to the beginning of the technological era.

Presented for the first time at Lyon fête des lumières, Green Invaders reconciles Yves Caizergues' interest in video games and his expertise in lighting design through the creation of an army of fluorescent green creatures that will invade Toronto's downtown core. Offering the viewers the possibility to re­connect, in an entertaining way, to a time where the low-tech technology was part of our lives and the practice of saving energy had yet to be thought of.

Yves Caizergues is a video game enthusiast who creates stage and event lighting as well as outdoor light installations. Caizergues believes that his task, more than just designing lights, is about transmitting and creating emotions. Having experience with live performance as well as large scale events, he is in a constant state of creation and in search of new technologies that will aid in transmitting and building stronger emotions within his audience.