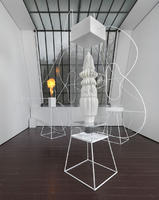 This installation is a new chapter in the artist’s quest 'to explore the means by which knowledge is generated in the absence of evidence.' This installation stages the voice of the earth itself, inspired by recordings of 'screams' emanating from various fissures in the planet’s crust, including the so-called door to hell in Turkmenistan, that have been reported in heterodox documentaries and in science fiction. It is comprised of a choir of shrieking and bellowing sculptures - three vitrines and their vocal catalysts. Each combines raw minerals and high-tech elements. One instrument uses the magnetic properties of erbium (normally used in fiber optic cables) to amplify and transmit the stalagmite’s testimony; another employs a neodymium amplifier to capture the electromagnetic speech of minerals; a third captures the roar of flame. The result is an unsettling chorus from the beyond.

10 Bay Street (Located in the lobby adjacent to the escalators.)