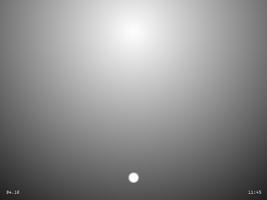 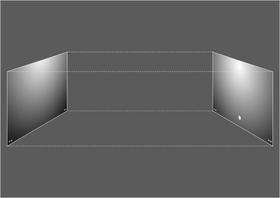 Two Voices captures the sunrise and sunset, moonrise and moonset, in Toronto over a one year period. One day per minute. 365 minutes corresponding to one year. Two screens facing each other. One facing East, the other facing West. At the bottom of each screen, days, hours and minutes set the passage of time on the accelerated scale of the piece.

The paths of the sun and moon are accompanied by a sound that corresponds to their duration, a different hertz per minute. The composition keeps pace with variations in the cycles.

Sometimes the moon will rise at the end of the day, sometimes in the middle of the night, or even during the day, accompanying the path of the sun. The durations vary from one day to the next, from one night to the next. When the cycle is long, the sound is sharp. When it is short, the sound is low. Sometimes the elements follow one another in time; at other times they appear simultaneously, harmonic or dissonant.

On moonless nights there is silence.

And then comes the day.

Angela Detanico & Rafael Lain were born in Caxias do Sul, Brazil. They live and work in Paris and São Paulo. They represented Brazil at the 52nd Biennale di Venezia. Recent individual exhibitions include Jeu de Paume, Paris; Museu de Arte da Pampulha, Belo Horizonte, Brazil and Musée Zadkine, Paris. They participated in collective shows such as the 10th Bienal Habana, Havana, Cuba and the 26th and 27th Bienal de São Paulo, as well as many others.