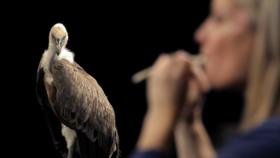 Raptor’s Rapture (2012) involves a flute that was carved by homo sapiens 35,000 years ago from the wing bone of a griffon vulture. Unearthed at the Hohle Fels cave in southern Germany in 2009 by a team of archaeologists led by Nicholas J. Conrad from the University of Tübingen, Germany, it is the oldest musical instrument found to date. This remarkable discovery brings further evidence of the role of music in early humans’ social network development, demographic and territorial expansion, and ultimately evolutionary survival.

The artists invited Bernadette Käfer, a flautist specializing in prehistoric instruments, to attempt to play the flute. This action takes place in the presence of a living griffon vulture—an evolutionary descendant of one of the oldest creatures to have inhabited the earth, and currently threatened with extinction. The film constitutes a moment of sharing with this scavenging bird of prey the musical remains of prehistoric human culture while the acoustic trace, emitted from the flute, presents itself as a time-capsule of sound embedded within the evolutionary emergence of musical capacities in humans.

Jennifer Allora (USA) and Guillermo Calzadilla (Cuba) live and work in San Juan, Puerto Rico. Collaborating since 1995, Allora & Calzadilla represented the USA in the 54th Venice Biennale. They have had a number of solo exhibitions in museums around the world and participated in numerous group exhibitions, including in documenta 13, the 29th São Paulo Biennial and Performance 9 at the Museum of Modern Art, New York.